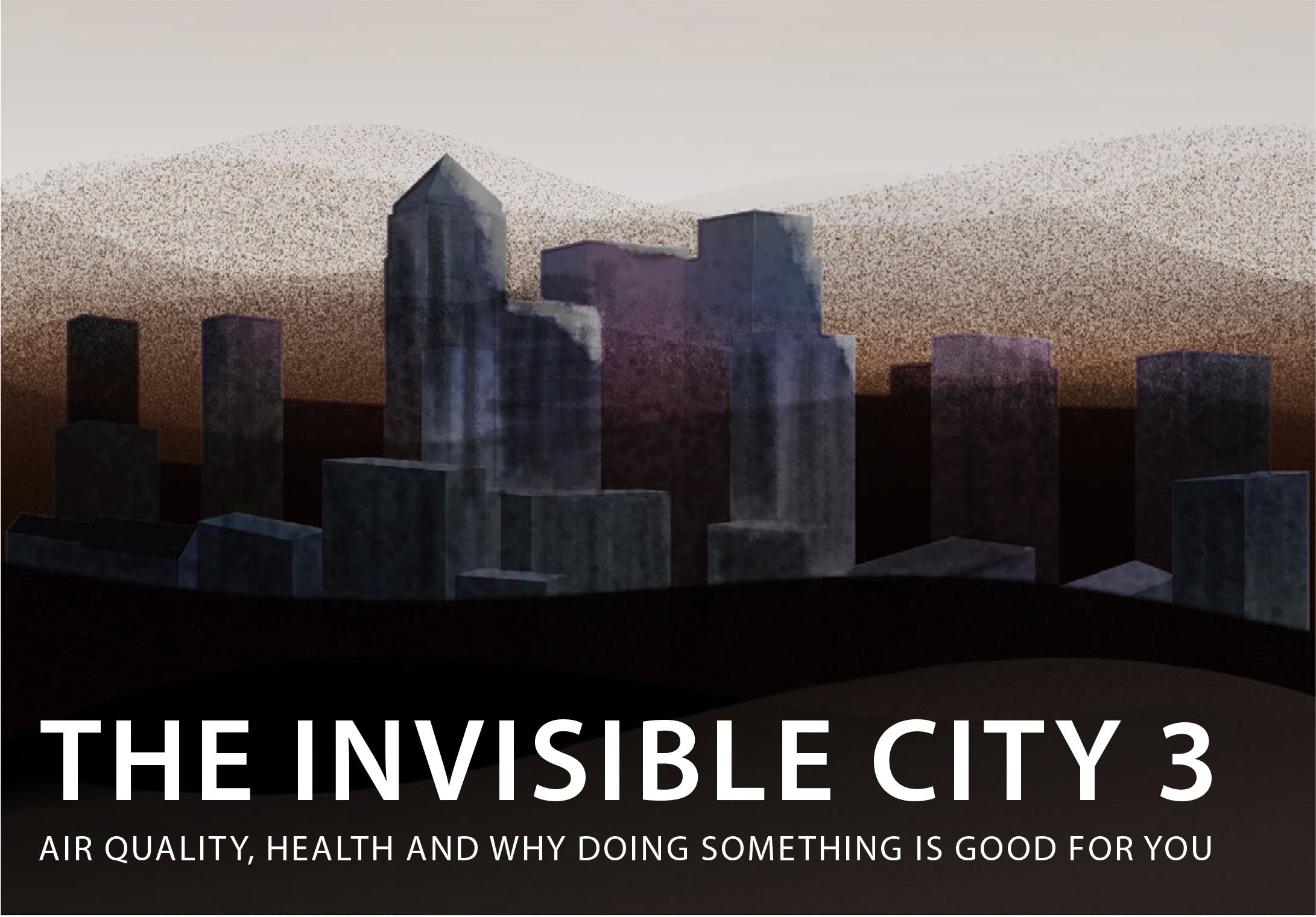 Not since the Clean Air Acts of the 1950s has the imperative to change the way we dump our waste into the air been so urgent.  These days it is the effects of invisible gases such as NO2 along with particulates produced by the burning of fossil fuels that are creating an epidemic of respiratory and other health problems related to air quality.

If the world is dragging its feet on climate change, should we be looking to harness the greater awareness of poor air quality in cities to bring more urgency to political and practical action on the former? This question was posed at the latest of the Happold Foundation City Conversations and the third to tackle ‘invisible’ infrastructure issues – on this occasion the pollutants in our air which are now recognised as a health and financial burden on our lives.

The topic discussed by an expert panel made up of Rachel Huxley, Director of Knowledge and Learning in the C40Cities Climate Leadership Group, Jo Barnes from the University of the West of England, Air Quality Management Resource Centre, Lucy Wood – Director and environmental planner at Barton Willmore and Tom Parkes, Sustainability Officer at Camden Council – before a large audience of mainly young professionals looking not only at how things should change but also their role in making this change happen.

Taking place at the uncertain times before Brexit the discussion highlighted some of the important issues which may have brought the UK to this pass. Jo Barnes described the research they have done linking poor air quality to social deprivation, the irony being that producers of least air pollution usually statistically suffered the most from its effects. The evidence she presented from Public Health England provides a compelling case for action.

The issue of ‘displacement’ – somebody else’s problem – reoccurred throughout the conversation. Regulation (another Brexit issue), and, in particular, targets for air quality, was seen as less of an issue. The WHO thresholds for air quality provide a target, many UK cities exceed these and are legally required to come up with a plan to do something about it. Why has it taken so long for there to be a political will to do something about it?

Jo Barnes showed that air quality is just one element in a number of multiple urban stresses including noise and heat. Her message for professionals was that these needed to be tackled together. In doing so, can this start to have a greater impact on climate change? In her view, having passed deadlines we now need to combat the lack of political will at all levels. Some of the silo mentality is now beginning to break down with joint strategy between government departments and, in cities such as London, the co-ordinating effects of the GLA providing greater coherence in collective endeavor.

Rachel Huxley has a unique perspective as the Director of Knowledge and Learning at C40 Cities where she has developed and led a priority programme of research on the co-benefits of urban climate action, as well as contributing to research on the barriers to climate action. She is well placed to see how a variety of cities across the globe can leverage public concern about air quality to tackle the broader issue of climate change.

They consistently find that air quality is a big concern for many citizens and this creates the political pressure and space for bold action by Cities in a way that climate change does not, as it is less immediate.  How to take advantage of this window of opportunity is key, avoiding past mistakes of tackling climate but worsening air quality, otherwise things could swing back the other way. They recommend to weave air quality considerations into the Climate Action Planning Framework process, but more often driver is air quality and climate action is woven into that. They see this issue driving a lot of change now, but how they try and support and steer this change using shared knowledge from between cities is really important.

Air quality, climate change and health need strong, consistent messages and action from central Government if we are to stand a chance of tackling them. Lucy Wood does not feel that, for example, 2040 – the date for the removal of fossil fuel driven cars – was an urgent enough target. She believes that The Clean Air Strategy sets ambitious targets for pollutants but Government actions are “too little, too late”.

As an environmental planner Lucy is concerned that air quality and health cannot be dealt with easily at the project level. Local authorities have an impossible task: we need new housing urgently but that would mean putting more people in polluted areas, with major health risks. But there are certain things we can do, she explains:

She concludes that physical infrastructure and regulation won’t solve the problem alone. We also need a cultural shift so that people change their behavior. It is perhaps at a local level that it is possible to influence behavior most and our final panelist came from the local authority in which the event took place.

To respond to the need to reduce poor air quality in the London Borough of Camden the local authority has started with a programme of data collection so that they know the scale of the problem in different locations. Some of the findings were eye-opening: not just traffic pollution but buildings and the heating of buildings was found to be a big source of invisible pollutants. In addition, building sites have a significant impact on air quality and mechanical plant and generators may need regulating if this is to be controlled.

Tom Parkes is leading Camden’s air quality monitoring and analysis, focusing on achieving compliance with World Health Organization (WHO) guidelines. Because they currently exceed those limits they are identified as an air quality management area therefore have to come up with a plan to deal with this. Their target is to be within WHO limits by 2030. Key priorities are the reduction of emissions through improved data coverage, assessing the air quality impact of Camden projects, and using data more effectively in engaging communities and other stakeholders to take action on air quality.

To respond to the need to reduce poor air quality in the London Borough of Camden the local authority has started with a programme of data collection so that they know the scale of the problem in different locations. Some of the findings were eye-opening: not just traffic pollution but buildings and the heating of buildings was found to be a big source of invisible pollutants. In addition, building sites have a significant impact on air quality and mechanical plant and generators may need regulating if this is to be controlled.

With careful use of the data Camden have strong democratic support for their actions. They may lack funding for responses at a more strategic national level but across London some positive action is starting to bear fruit. Transport has become an obvious target for action: encouraging more active travel, less private car journeys, reduction of diesel engines and replacement with low emission technologies.

New sharing economy models sound good, but diesel-powered delivery vans still compete for business on our streets. Tom demonstrated that a local authority could achieve a small amount in this area but the big gains would be at a city and national level.

Buildings are often forgotten as one of the major sources of CO2 in our cities. The panelists touched on internal air quality only briefly, but see other Conversations – EV2040 and A Breath of Fresh Air – which discuss the impact of electric vehicles on pollution and noise with the potential to bring about huge change in natural ventilation of buildings in cities. Camden are trying to encourage small businesses to adopt similar transport measures but there is a limit to what local authorities can enforce.

The audience discussion raised the issue of ‘unintended consequences’. How to we encourage people out of their fossil fuel powered vehicles with an appeal to better air quality and better health, if the alternative forms of transport are less attractive from the same point of view? In London the underground system is deemed to have poorer air quality than above ground, and cyclist and walkers are also exposed to high levels of pollutants depending on their route. This highlights the dilemma for government and planners: at a granular level, local support is for measures that will make their lives better; the problem is that these measures will affect people with a much broader reach – people who commute through the area for example – and that is why more strategic level planning is required also.

The audience also highlighted how post industrial nations were exporting the emissions from industrial processes – even for the production of clean technology – to communities in less developed countries where the environmental protection is more relaxed. There is a broader debate around the fairness of this kind of trade, but the issue of displacement is central to understanding clean air policy and at the heart of this is the requirement to rein in our global habit of dumping CO2 into the atmosphere.

There was also much discussion around the issue of consumption. ‘Consume less’ was a theme that came up often in the discussion but this may be at odds with the prevailing economic model which demands growth. We want a flourishing, vibrant city where wellbeing is often linked to the notion of economic growth. Perhaps we should take note of the success of Mexico City where, as one member of the audience described, it was impossible to see the surrounding mountain 25 years ago due to the smog. Now they have turned things around and provide a model for other cities to follow.

In conclusion, air quality is important is and has a significant impact on people’s lives and the attractiveness of a place to lives. There is a tendency to for poor air quality to affect those in deprived areas to a disproportionate extent. Government at all levels need to have a greater commitment. Local government can harness the views of their electorate but often need to be part of a wider city or national strategy.  Planners and developers can have an impact; at the moment there is not a great deal of understanding by planners of the consequence of their decisions and too many conflicting requirements. Beware unintended consequences: think ‘big picture’ and ‘long term’ to be successful. It is probably expedient currently to link awareness of climate change to improving air quality; but if London can start to breathe easier within the WHO limits by 2030 the challenge of CO2 emissions will remain much longer than that and we will need to find other ways to keep it in the consciousness of the city.