Over a week during July, local families from North Glasgow were given a change to get involved in the City of Play project, a den-building initiative supported by the local community food initiative and the Happold Foundation. Located in Milton, a deprived area of the city, the project welcomed over 600 people across the five days.

With the theme of ‘Tinker Town’ – taken from the idea of ‘tinkering’ or improving something – the project involved bringing families together to create their own outdoor creations, giving them the chance to bond and meet others from different backgrounds. Working alongside a team of architecture student volunteers, the youngsters were able to build a scrap timber village of their own. The families were also taught how to use tools and materials safely to design their structures. 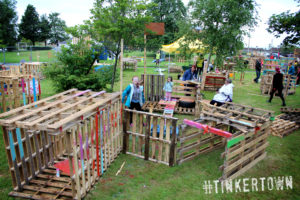 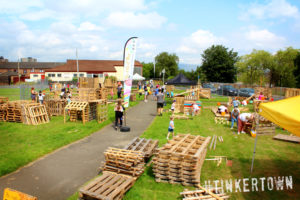 As well as providing opportunities for families to design their dens, the project was also supported by the North Glasgow Food Initiative, who supplied healthy and nutritious food for the attendees throughout the week. Susan Miller, Food Hub Co-ordinator and registered dietician, says: “We are delighted to see so many benefits, play for the whole family, increased social interaction, with children mixing from a variety of different communities and backgrounds.”

Following the project, City of Play director and lead designer Grant Menzies said, “the project is about giving children the freedom and confidence to use real tools to design, create and play in their own way… allowing them a space within the community to adapt and adopt for themselves, even if only for a short period of time. We also had a number of families take their built structures home with them, it’s always great to see we have inspired a new generation to build and explore ideas together.”

The project also received very positive feedback from the children who took part in the event. Grant explained, “we have had so many kids telling us that it is ‘the best thing ever,’ ‘the best day ever’ and even ‘the best place I have ever been to in my life!’ 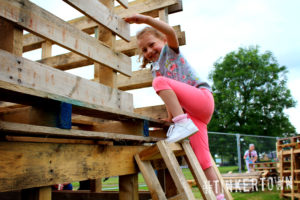 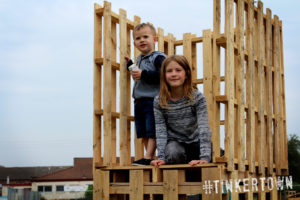 2019 was the second year that City of Play ran the Tinkertown event, which saw a considerable increase in families attending. 677 people attended this years’ event, a rise from 350 who attended during 2018.

To find out more about City of Play and other Tinkertown events taking place across the UK, visit www.thecityofplay.co.uk.