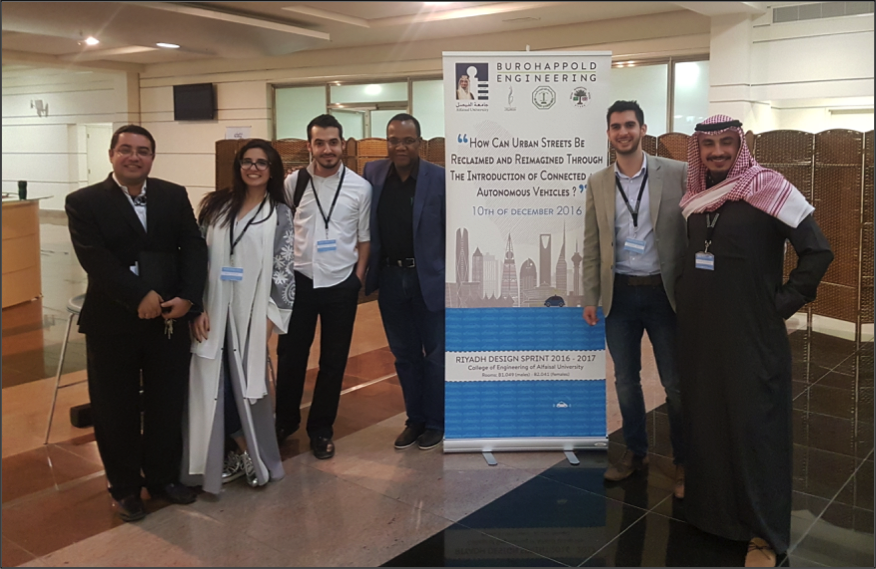 Riyadh’s Design Sprint took place in the College of Engineering at Alfaisal University on Saturday the 10th of December 2016. Eight teams from three different universities (Alfaisal University, Prince Sultan University and King Fahad University for Petroleum and Minerals) participated in the Design Sprint. Two high school students from the British International School in Riyadh joined each team to help imagine what the future of Riyadh could be with the introduction of connected and autonomous vehicles. 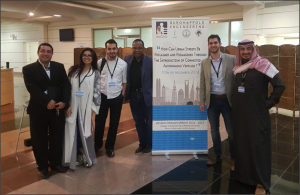 As an introduction, Robert Okpala, group director in BuroHappold, presented
the Happold Foundation to the audience. Following the introduction, Dr. Tarek Mokhtar, chairman and assistant professor of Architectural Engineering in Alfaisal University, set forth the things that were learnt from the Google car prototype and shared some examples and concepts of futuristic cities.

Next, Mr. Muath Khilfawi, general regional manager for Careem, showed the potential role of CAVs in transportation companies and suggested that we don’t really need to own a car. Instead, we need reliable, affordable and consistent modes of transportation. He wrapped up by saying that owning a car will be inconvenient in the age of autonomous vehicles.

Later, Dr. Jalal Nafakh, head of transport planning in Arriyadh Development Authority, stated that driverless cars will compete with the coming metro, which have already cost the government a lot to construct. He also suggested some interesting research questions related to CAVs: Will CAVs improve the safety record? What will be the total number of kilometres driven when CAVs are implemented? Do Riyadh’s streets have enough capacity to hold more trips? Will CAVs violate reinforcement agencies? What will happen if the data stream breaks? He ended his talk by saying that the country’s economy will be in favour of CAVs because of sharing.

Eng. Ahmed Jarallah, architect at AlAkaria Architects, brought up the advantages and disadvantages of CAVs he saw while living in in Silicon Valley and listed the aspects that should be taken into consideration. These included vertical parking, charging stations, roadside sensors, speed pumps, elimination of off-road parking areas and the reconsideration of drop-off areas.

Next, Damien Ricq, engineer at BuroHappold, introduced the necessity of developing clean distributed means of electrical generation and smart grid management system to support the energy requirements of the autonomous electrical vehicles introduced at large scale in the city of Riyadh. The presentation discussed the needs for more renewable energy to be produced within the built environment and road surfaces.

Dr.Anas AlFaris, assistant professor at KACST/MIT, shared some city dynamic analysis performed by his students. Telecommunication data was used to understand if users could be identified according to usage pattern. The data was also used to identify how users moved within the city. The students also analysed electricity demand and tried to collate between energy flow and people flow to track people and points of attraction. The data defined the points and times of congestion within the city.

A while later, Eng. Ibrahim AlShaye, head of planning and environment in Arriyadh Development Authority, briefly introduced Riyadh’s transport strategy, planning and initiatives undertaken to improve transportation of its citizen more safely and more efficiently. The discussion covered the needs for reconciling individual user needs and public transportation within the context of an ever smarter transportation system.

Once all the presentations were done, Dina Haddad, Yousef AlEshaiwy and Khaled AlKhalil walked the participating teams through the process of the design sprint.

During the defining session, each team was given a matrix that helped them to start thinking about the aspects they are to consider in their design. They were provided with photographs and plans of the site for them to sketch on. 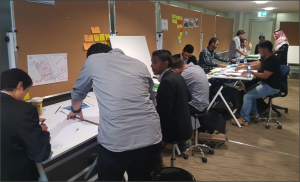 Following the discussion around the matrix, the teams were given 40 minutes to come up with as many ideas as possible around the question: “How can urban streets be reclaimed and reimagined through the introduction of CAVs?”

Afterwards, each team presented their ideas about the way the streets can be reclaimed to the rest of the teams to get as much feedback as possible in order to choose an idea to take further to the design stage.

The teams took an hour and a half to design their initial idea in more detail. The key themes they focused on were:

Finally, each team had 10 minutes to present their idea in front of everyone else. Some of the teams built a physical model of their ideas while others preferred to present conceptual sketches.

Each team was given a rating sheet and was asked to rate each team’s idea under the key themes: