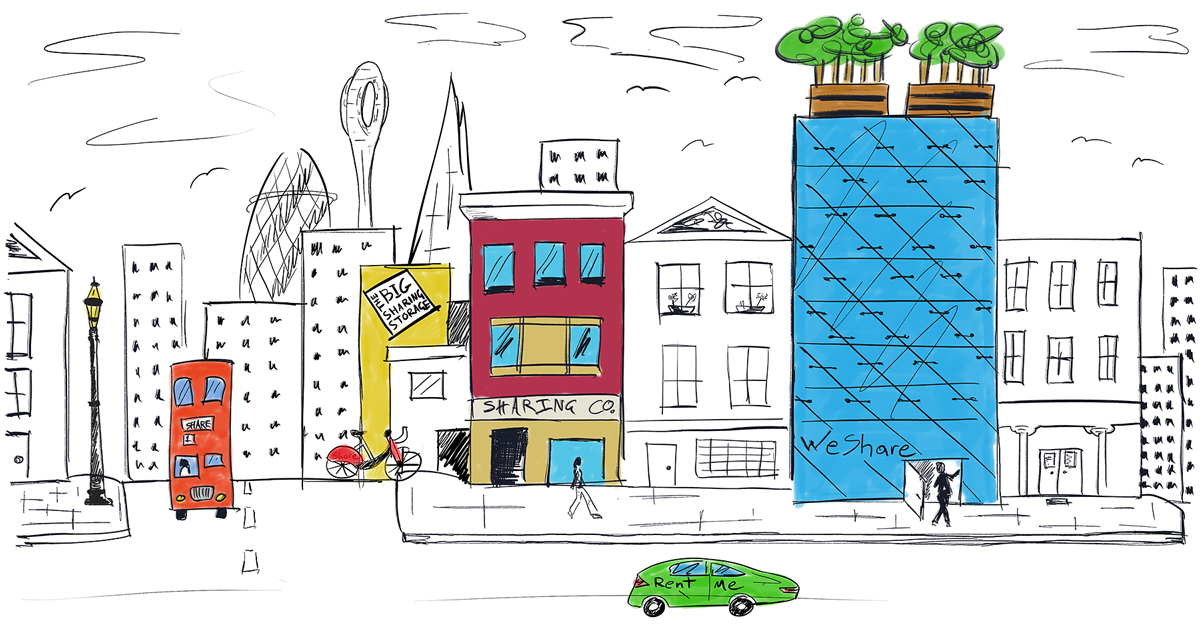 The sharing economy can lead to a more equitable sharing of space and time and the rewards of work. How does it change the way we create and use the infrastructure of a city? It is argued that there is a deeper rethinking of the economics of living in cities: these ideas are not new – see for example William Morris News from Nowhere (1890) – but the theoretical ideas are more tangible on a wider scale as a result of new technologies. Every generation pushes back against the iniquities of capitalism in the city. The sharing economy takes advantage of technology-enabled platforms to create efficiencies and value. However there can be unexpected consequences such as the exploitative impact of the gig economy. Key to the debate is who is in control – and under what set of rules. Does the private investment model work best in this area, or should we be encouraging more social enterprise. Should government – national, city wide and local – set the rules, or can we still aspire to the original goals of the internet where everyone can freely participate and benefit on a wider scale.  Our panelists provided positive models of different approaches to sharing and led us on an interesting exploration of different ways of looking at the economy of cities.

Watch the event summary for an overview of the Conversation. Links to panelists’ presentations can be found at the end of this article.

“Sharing is efficiency” came the passionate response from the panel when challenged about what was different in the sharing city of today compared with previous initiatives. The implication being that the efficient use of resources was now an essential part of our response to the climate crisis in cities and a sharing approach was one way of achieving this. This Conversation celebrating diverse aspects of the sharing economy offered glimpses of some of the issues that sharing can tackle but also how far we still need to go for sharing to have a major impact.

It is a shocking statistic that globally – and mainly in western cities –more than a third of food production goes to waste. “If food waste were a country, it would be third behind USA and China in terms of CO2 emissions.” This is according to Georgie Cella from the food-sharing app Olio whose purpose is to try and reduce this through linking both consumers and retailers through technology. New technology is allowing the sharing of resources to become a lot more widespread and scale-able, with the food sharing app OLIO being a good example of how this can work to help tackle the climate crisis.

There is no doubt this app works and is admired as much for highlighting the problem as well as tackling it. But a million users worldwide can only be seen as a beginning given the size of the problem and ironically, success would be measured as the reduction in sharing rather than the need for more. Such systems rely on over-production, and maybe we should be shifting our focus towards a degrowth economy instead. In the mean time, the biggest benefit is bringing the problem to our attention and giving citizens the ability to respond.

Apps seem central to the delivery of much of the sharing activities of the modern city. Spacehive. For example, provides a platform for a more efficient pooling of financial resources for local planning, and realizing projects. What is really impressive about this app is the way it connects local people around local initiatives whilst at the same time making the process of drawing in government and other appropriate sources of funding.

Scott Barnes has first hand experience of the impact citizens can make in transforming spaces, growing the local economy and bringing communities together, and believes bringing citizens together with public and private organisations to achieve common goals is a must-do for councils and other organisations who want to improve their local areas and make their resources go further.

The App is full of interesting projects, not all of which will get built; but you feel that for many this is the best way they can reach their funding target and engage the local population in local developments and certainly better than the existing mechanisms.  There are some good statistics to back this up: for example using the app can Increase in the effectiveness of fund-raising threefold whilst the average distance of those backing schemes is two miles from the scheme itself

But not everyone was comfortable with the mobile platform as the basis for sharing activities. In particular the technical exclusivity – not everyone has access or the savvy to use apps –  may create a false perspective on the benefits to a community. Many felt that there should be a non-technical fallback for the initiative for it to be seen as truly democratic.

Beyond the app it is the project itself which can create a particular focus for sharing and this was really at the core of the sharing conversation. At Make Shift, they are interested in the way that public space has a role to play in the ongoing development of our cities. With the sharing economy giving people access to privately-owned assets on a rental basis, they asking bigger questions about what happens when communities come together and feel a sense of real ownership over assets owned by the community as a whole.

The use of often undervalued assets to create local economies which employ locally and return much of the profit to the local area seems an important model to work on. In particular profit is seen as an important component of these activities. It is perhaps no coincidence that the area of south London where the Makeshift schemes are located has its own trading currency – the Brixton pound. How do we create more of these initiatives? Do meanwhile spaces fill a similar void or should planners look at these type of shared asset in a more permanent way?

It is a curious fact of British life that we see housing as something apart from the infrastructure of the City and a special economic case. With so much housing now a private asset and the alternative ‘social housing’ model in decline it is difficult to discuss this outside the question of how to deal with under-supply and affordability. This is the most difficult nut to crack.

It is refreshing therefore to hear about the Danish approach to creating better and more sustainable ways of city living.   Co-housing is essentially an economic model but Space 10 realised that sharing principles could have a  broader impact. “We believe shared living is a great opportunity to make our cities more liveable, sustainable and affordable.”

Jake Heitland reads the emotional connectivity of the city. He is a passionate urbanist believing that the private and public sectors alongside urban citizens must work collectively to make them more inclusive, affordable, happy, well-connected and urgently climate-positive places to live, work and enjoy.

Personal experience and specific projects around loneliness highlight the social importance of shared spaces both within buildings and within the city for communication, interaction and relationships to develop. The ‘flip-side’ to this is the huge, often unseen, cost to the city and its support services of the symptoms of loneliness – depression, self harming and physical stresses.

“If we are to make our cities equitable and climate-positive in the near term, then we must alter both our cities and our habits to make sharing resources easy and efficient for everyone with an added priority on creating more shared spaces where us as humans can share more of ourselves, our feelings and reconnect in meaningful ways to effectively combat rising mental health issues. “

In summary, the conversation converged around the view that the current paradigm for urban development needs a radical shift to meet the climate change emergency and align with the Sustainable Development Goals. People need to be at the heart of how cities are designed; and communities need to be given a voice and empowered so they benefit from development in their vicinity. Sharing is paramount to this and a collective change in mindsets is needed to make our cities socially, economically and environmentally sustainable.

Mohamed joined BuroHappold as a Happold Scholar, completing a placement in the Transport team and later returning as a graduate. With experience in both Transport and Infrastructure, he is fascinated and motivated to understand cities and their underlying systems. He continues to cast this lens on any scale and has organised design sprints in his role as a Happold Foundation Community Ambassador to engage this thinking on the challenges at the International level.

Leo has a background in architectural design, placemaking and meanwhile development. Part of the founding team that delivered Pop Brixton, Leo now works across Strategy, Design and Acquisition for Make Shift and has a strong interest in new models for inclusive regeneration.

Georgie is a Business Development Manager for the Food Sharing App OLIO. Having had a varied early career, previously managing a small volunteer charity, she made the move into the private sector whilst maintaining a focus for a job with a social purpose. She is passionate about community and sharing resources and so, as a previous user of the OLIO app, is excited to be working in the sharing economy sector.

Kirstine Kolling Hansen is the lead researcher for the shared living case at SPACE10; IKEA’s global research & design lab. Kirstine is a management graduate from Copenhagen Business School. She has worked with social innovation and cities for the past five years and is especially interested in, how shared living can help make our urban environments more sustainable and inclusive for the people living there.

At Lendlease, Jake is currently focused on facilitating change to enable such a vision in current and future developments across the UK as well as assisting various government bodies to create more equitable policies and make informed investment decisions. Since October 2018, he has also been helping in the fight against loneliness following participation as a Design Sprinter for the week-long Loneliness Lab with work specifically targeting the negative mental impacts resulting from the design and operation of student accommodation and offices.