This Happold Foundation Conversation focused on how materials create an identify for the city, and discussions between the panellists considered contemporary versus traditional building style. 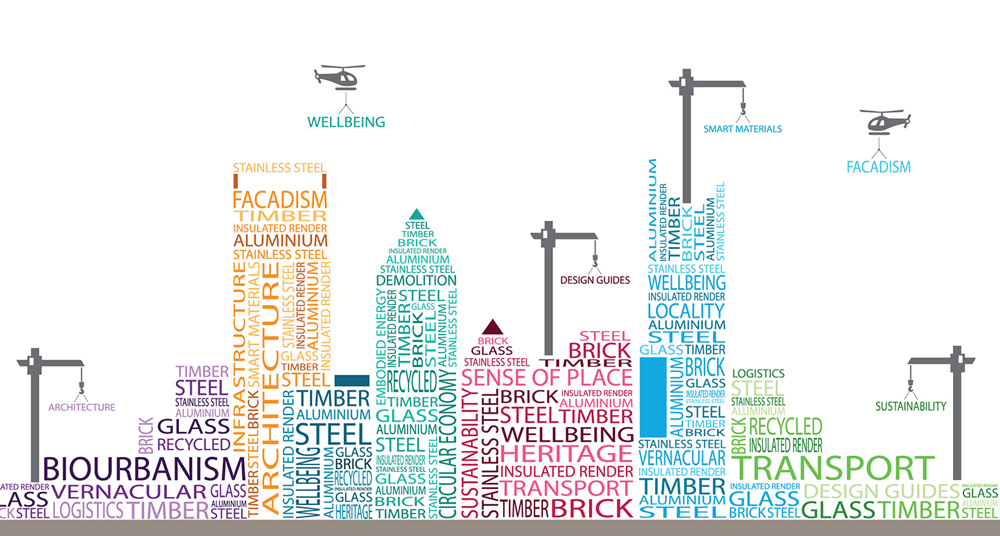 During this Conversation, our panel discussed a number of different themes around the use of materials in city construction, specifically London. The panel addressed issues around the history of the architecture of the city and the need to create contemporary developments that are better suited to the modern city. With the Georgian and Victorian elements of London defining much of its character, the panel debated the need for cities to retain their sense of place by using traditional materials compared to the need for more efficient, environmentally friendly buildings. The panel also considered the GLA’s predication that London needs 50,000 new homes built per year for the next 20 years to accommodate its increasing population.

With the building industry in London currently only producing 20-25,000 homes per year, we are currently a way off the GLA’s recommendations. A new London vernacular – architecture that considers the practicality and function of buildings for their occupants rather than their use as public monuments – might be the answer. During the Conversation, Design For Home’s David Birkbeck argued that the key is not material choice but repetition, without ignoring the importance of being ‘of the place’. Alongside the Victorian terrace and Georgian Square we could also look at the late 19th Century Mansion block and more recent precedents such as 1930’s semis and post-war Tower blocks to create a sense of place.

While there was a great deal of innovation between 1990 and 2010, there was not much repetition. “Architects are less comfortable with repetition, which may explain the tongue-in-cheek example from Hawkins Brown in the housing design awards,” Birkbeck explains. “They take a perimeter block, break it into smaller elements, sub divide them into cores, provide access onto the street, clad it with brick, put all the fenestration into a regular grid, compose the elevation, put a roof line as a parapet, then orient windows portrait and full height and set them back into deep reveals. But this is an important aspect of innovation.”

“Repetition is important,” Birkbeck continued, because “we are now moving up through the gears in terms of density’” Until 1981 density was considered socially dangerous; now it is considered highly desirable. The London plan ‘petal area’ density matrix shows flats being built at 300-400 homes to the hectare as opposed to about 150 in the 1960s and 70s. However, surveys have suggested that more than 40% people don’t want to live in new homes because they are out of character with where they live. They feel they want something that looks like it is part of London.

Birkbeck stated that schemes that successfully solve the democratic deficit of London housing will need to address this. But there are other factors. They also need to look at the tenure split between social, rental and shared ownership, and how these are deployed around the blocks and how the street scene is made to work.

However, as the Conversation unfolded, it became clear that this is only one approach. Less orthodox solutions to the density issues can also prove to be attractive for the right demographic in the right location: the modern heavily glazed tall tower still has a future.

Jonathan Schifferes, RSA’s senior researcher, looks beyond the planning and architectural regimes of delivering housing and is concerned with the issues of heritage, identity and place’ and how they define the material aspects of the city. It is perhaps too obvious to state that if people are authors of their own lives, it usually leads to better outcomes. Schifferes raised the question of how do we create an understanding of the built environment that allows them to do this? Specifically, how do we interpret the past outside its physical manifestation? “Many of the things that we put a value on seem to happen by accident – streets and public spaces such as St Christopher’s Place are seen as valuable because of the street culture and the interaction created. We are losing this all the time because we don’t know how to create this, describe it cherish it.” Schifferes stated.

According to Schifferes, these days we are better at dealing with built environment heritage compared with say the traffic-led urban planning of the 1960s. Because it is difficult to replicate, we make good in places such as King’s Cross. Then there is the Heritage of unintended use in places such as South Bank Undercroft. This is unintended but cherished in a sort of ‘grungy’ way. People make the city and make the social space. Local connections are important – strongly expressed by the murals in Northern Ireland or something as simple as a blue plaque.

It is important to think about how we use data about the built environment and heritage in our cities. [image] Schifferes has created a map that codes different neighbourhoods by the modal decade in which the homes were built, which uses data from the Valuation Office Agency. We have more to learn about the places in our cities using new tools. Built environment professionals need to get better at commissioning, using, interpreting evidence such as this.

How do you give people ownership of places? Heritage is one way in: it gets people engaged in the same way as food and sport. But we can’t rely on official Government datasets; so they have set up the Heritage index at the RSA. It gets people talking about what their place has been and what they want it to become. How to unleash heritage – not history but the contemporary meaning we give to history. “London’s heritage future lies in reclaiming and rebuilding the streets and integrating high density. It doesn’t fit a lot of prevailing policy and it doesn’t fit the financial model of a lot of developers and investors. So we need new policies and we need new models,” Schifferes argued.

John Lyall has spent much of his recent architectural career dealing with water and sewage, and is thankful that architects are being drawn back in. There is a great tradition – Bazalgette’s great pumping station, for example. “We lost our way with these sort of buildings in the 50s 60s and 70s where the technical engineer ‘just did it’ – the results did not have ‘presence’,” Lyall explained.

Lyall’s work on some of the Olympic Park infrastructure buildings include Pudding Mill sewage pumping station, the Blackwater plant for irrigation and the Stratford box. The buildings use materials in a modern way appropriate to the location but at the same time there is a homage to Bazagette’s heritage etched into the concrete. At the same time they represent a new architecture for infrastructure buildings. They use offsite construction but are built to be robust – another important aspect of our emotional response to materials and built environment. They incorporate nature – Lichen and moss grow on the roofs. Cladding patterns are based on the winter trees in the area. They employ Corten steel concrete,  gabions from recycled local structures, larch, and Belgian Engineering brick. All part of a modern design palette that is not a pastiche of heritage, more  “A bit of delight we can muck about with”.

How do you persuade clients to value design?

A key ingredient in the success of the buildings that Lyall describes was having a client representative, such as Kay Hughes, with architectural sensibilities. Further up the decision chain, Kay thinks it is at the inception of a project that the important decisions happen. Infrastructure buildings should look good and the legacy of what was produced on the Olympic park shows that this creates ‘civic value’ through a materiality that reflected London.

London has an infrastructure plan, but within this it is important to set a business case for individual projects for good design. Hughes explained “too often in an options analysis benefits weighed in terms of resources – for example, traffic electricity and resilience – there is only a ‘cursory nod’ to design, quality of life and legacy. Design should include both function and personal experience of the end-user.”

Hughes also highlighted that design reviews need to be framed properly in programme documents for a project and the priorities for this clearly communicated to the implementation team. “There are often very innovative people coming up with great solutions but if the framework is wrong, it won’t have any impact.”

Integrated thinking around the impact of the built environment is key – there are many examples where the lack of this leads to problems, or “unsightly bits around the edges” that nobody has taken care of because it was not part of the delivery objective. A good model for the future are the principles adopted by Tfl – it would be great if we applied these on all infrastructure projects.