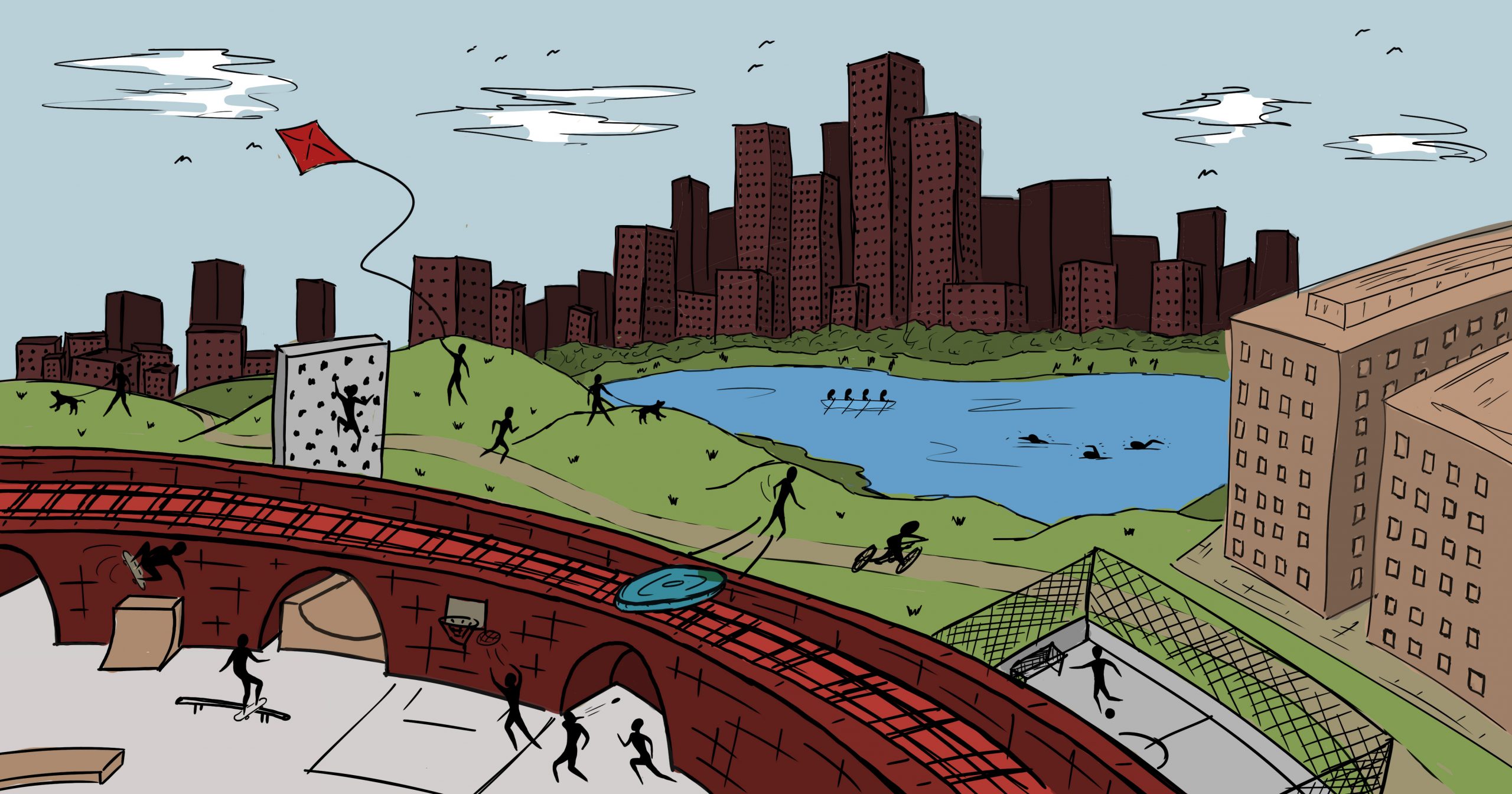 What makes a playful city? How should we create spaces for play activity and is it possible to plan these effectively or can it happen spontaneously?

Watch the event summary for an overview of the Conversation. Links to panellists’ presentations can be found at the end of this article.

People are divided in their acceptance of those, often unplanned, playful spaces where the population can indulge in marginal activities with very little administrative and commercial control. Examples of this include skateboarding and rollerblading, recreational cycling, park games such as frisbee and rounders, climbing and running – parkour, ‘wall and ball’ sports such as handball and fives. Places are important to allow these activities to happen.  Watersports, for example, rely on access to rivers, docks, lakes and ponds for swimming, rowing and sailing.

Do cities need to create more opportunities for these activities to happen? Can they be planned and can we make them both attractive and safe at the same time?

For this Conversation we invited a number ‘players’ to describe the activities and places that make up their playful city. We wanted to find out what makes them attractive and successful and explore in conversation the importance of these ‘discovered’ playful activities to the life of the city and wellbeing of its citizens. It was a bigger panel than usual to reflect the diversity of playful activities.

Dr Oli Mould is a geographer at Royal Holloway, University of London. He is the author of articles on “creativity & the city”, and the books “Urban Subversion” and “The Creative City” (Routledge, 2015) and “Against Creativity” (Verso, 2018).

He considers the public realm of the city to be a vital component of our democracy. The twenty-first century has seen the rapid privatisation of urban space. Without being able to actively create the cities we live in, they are becoming spaces that foreground profit before people. Engaging in ‘playful’ activities in the city is the first step in reclaiming them for the public. Skateboarding, parkour, graffiti, urban exploration; there are many urban subcultures that are actively repurposing the city to make it unknowable to profit-making processes. Cities that embrace space for subcultural and counter-cultural encounter are those that are making a positive difference to the lives of their citizens.

Iain Borden, Professor of architecture at The Bartlett and author of a number of books on skateboarding and the city was unable to participate, but he believes that public spaces in cities should avoid the all-too-common passivity, regulation and consumerism of shopping malls, and instead should be filled with creativity, energy and pleasurable surprise. The inclusion of skateboarding in the public realm provides one clue as to how this might happen, opening up opportunities for multiple public encounters, and so aiding public diversity, community engagement and social cohesion. Enlightened cities and developers worldwide are increasingly following this direction, providing positive examples of how this might be achieved.

Jane Wernick of engineering firm HRWlikes to work on projects that give delight. Her most notable project, when at Arup, was the Millennium Wheel. In 1998 she founded her own practice with many playful projects including the Young Vic, the treetop walkway at Kew Gardens and the Living Architecture houses. She believes that creating architecture and the city must strive to make people happy. She edited the RIBA Building Futures book, ‘Building Happiness – Architecture to Make You Smile’.

Her playful participation in the city seeks out a natural respite from the hubbub of urban life. Jane swims all the year round in the outdoor Kenwood Ladies Pond on Hampstead Heath in North London. It represents a piece of peaceful nature within the bustling city, providing opportunities to improve mental and physical health in a calm and gentle way.  It is an antidote to our often stressful and competitive world.

During the day, Mark Warren is an architect and urban designer from Studio Egret West; at night, he is a street artist on a simple mission: to turn the city into a playground. Mark turns bins into basketball hoops and bus stops into swings. These interventions allow the public to interact with its environment in a playful and creative way. Mark hopes to inject a bit of spontaneous play into people’s lives.

In his view the public realm should be a place of social connection that everyone can access. Play should be integrated into this. Playing is a multigenerational activity that should be encouraged for everybody: adults as well as children.

We often find ourselves in unsociable spaces which don’t allow for much freedom or spontaneity. The capped handrails stop people from sliding down stairs and awkward street benches prevent them from using the space comfortably.

We must design to play with the body and mind. This is how, he believes, we can make a happy city.

Emily Scones is a Computational Design Engineer at Ramboll UK. In her spare time you will often find her playing Eton fives, a minority sport played against a wall – but not just any wall: the game was invented in the 19thCentury in a ‘found’ space by Eton Chapel by school boys waiting to go inside. This spirit is something that planners and developers could adopt, she feels: “Don’t just see a wall as a barrier, but as the starting point for a game that hasn’t yet been invented. The game has since been codified into an organized sport which is played mainly in English public schools. She is currently a Director of the Eton Fives Association whose aim is to try and extend the reach of the game into broader parts of society. The most successful example of this is currently the Westway Sports Centre in London which has created new courts – based on the same Eton chapel wall – and attracts a broad range of players.

In her view, encouraging these playful spaces is paramount to creating an environment where people want to live and have the opportunity to grow. They create communities, develop friendships, and can help people live healthier, happier lives.

Freerunning or Parkour are perhaps the ultimate expression of urban play.Sébastien Foucan of the Foucan Free Running Academy is one of the pioneers of Parkour which he and his friends started in the late 1980s in the suburbs of Paris. He later founded Freerunning in the influential documentary “Jump London” which has since established itself as a term for a distinct cultural movement. Through his opening scene in 2006 in the James Bond movie “Casino Royale”, he and Parkour/ Freerunning gained major attention worldwide. Although Parkour is very much derived from the city, he does not feel it is linked to particular places but rather a state of (body and) mind. It is a sort high energy existential response to one’s immediate environment. He is passionate about teaching people to “think outside the box” – a commonly used metaphor – to which he adds a powerful physical expression.

Christian Spencer-Davies is founder and managing director of the architectural model making firm AMODELS. He is well known to many in the industry as a very good cyclist. He has always had a leaning towards speed and competitive sports form an early age, including motor racing (from 6 years old). He represented Britain at Frisbee in the European and World championships and was 4th in the European Championships for Hacky Sack (keepy uppy) somewhere back in the last century. He was a skiing instructor for 11 years and snowboarding instructor for another 8 –he even taught Eddie ‘the Eagle’ Edwards to snowboard. He tried racing a bicycle for a few years, but can now be most often found in Regent’s Park helping new cyclists ride as a group for fun or for Cycle to Cannes which he has done 10 times.

He believes play activities find their places in the city through a sort of natural occupation. Regents Park is typical of those places for cycling. It is accessible at all times and endlessly extendable – “you just keep going round until you have had enough, and end up in the same place”. Although the roads are public highway, there are no active frontages, so no reason for cars to stop. If you go anti-clockwise, keep turning left, you don’t ‘T-bone’ any traffic. There are rules of the road but these are self-enforced.  And it is sociable – anyone can join in, in all weathers and there is a welcoming café for getting together when you have finished.

Inclusiveness was something that was emphasised by all the speakers, in particular encouraging young people to join in. Interestingly, many participants mentioned the importance old the older age groups being involved both and spectators and participants and that there were many benefits of bringing the generations together around play spaces.

Another concept that was introduced to the discussions was “anti-design” – deliberately creating places or objects which were to inhibit play activities such as skateboarding. The Camden bench was cited as an example of this. There was unanimous disapproval for this approach.

Copenhagen was congratulated as being a city where play was planned as an integral part of the citizen experience throughout the day. Examples included ski slopes on large roofs and public trampolines at the top of public car parks where you looked down through a number of clear storeys to enhance the feeling of excitement.

The last word was provided by Steve Williamson of the Happold Foundation, who chaired the conversation. Steve is an engineer who is currently working on the new Tottenham Hotspur Stadium. This allows him to indulge his passion for the more conventional activity of football, that he developed as a boy in the open spaces of Edinburgh.  He believes planners and developers may be missing a trick when trying to diversify and energise mixed-used developments. The default position is often ‘retail, retail, retail’: but he feels we should take another look at places where people gather to play, to watch and participate. The immediate value is health and happiness.

Can these places be successfully planned? Panelists presented a contrast of examples – designated places for swimming and Eton fives and other activities that occupied places in a more informal way. Perhaps a mix is the way to go; just avoid ‘anti-design’!